As many of you know, the All India Carrom Federation has introduced this year new Rules for the Carrom Tournaments, which are being practiced in India. They are described as « revolutionary » steps in Carrom. As far I have heared these changes are being widely greeted in India and in some Asian countries.
I am sure that these rules will be discussed in the next meeting of the International Carrom Federation and may form a guideline for all International tournaments. We shall also be discussing these rules during the coming 13th Eurocup at Lenk, Switzerland. The European Carrom Confederation (ECC) has to give its opinion on it.
It is therefore very necessary that we know the opinion of all Carrom Federations and their members, particularly the active players.

I personally welcome to some extent the initiative of the All India Carrom Federation as a bold step in the right direction, which is aimed to make Carrom tournaments simple as well as friendly to media and spectators.
However I have certain reservations to these changes and have some suggestions.
But before I ask you to read my comments and proposals I would request you to go through the present « Laws of Carrom of the ICF » as adopted in 1991 and the draft of the new Rules (Shorter version Rules) proposed by the All India Carrom Federation and then read my comments and suggestions and then make your own comments and suggestions.

NEW RULES (of All India Carrom Federation, adopted in 2009)

1. All matches shall be decided on the basis of best of three sets of four boards or 23 points whichever is earlier. A player who reaches 23 points first or leads on conclusion of the fourth board shall be the winner of the ‘set’.
2. ‘Game’ shall be called a ‘set’.
3. A time of two minutes shall be allowed between the 1st & 2nd sets and also between 2nd & 3rd sets. Players shall be allowed to consult their coaches during intervening time of two minutes.
4. Players are not allowed to leave the playing arena till the match is completed.
5. In the 3rd set, side shall be changed after two boards.
6. A player shall not take more than 10 seconds to make a stroke and/or to place the penalty/due.
7. A maximum of 11 points can be scored in a ‘board’. Any due and/or c/m shall automatically be written off.
8. Queen shall have the value of two points. The player shall be entitled to be credited with the value of the Queen, only if he wins the board. Loser of the board shall not get any point even if he pockets the Queen.
9. Queen is not required to be covered.
10. The player shall not lose the advantage of getting the credit of two points for pocketing Queen even if reaches the score of 21 or 22 points. In other words, a player shall get two points for pocketing Queen at all stages of the set without any consideration of the score.
11. A player has the right to pocket the Queen provided a c/m of his own has already been pocketed.
12. Queen can be pocketed even after pocketing one’s all his nine white or black c/m.
13. In case a player pockets all his c/m while the Queen is on the board, the board will not be treated as over. He can pocket the Queen as the last c/m. If he pockets, he wins the board. If he fails, the turn will pass on to the opponent. The opponent can choose to pocket the Queen either at the beginning or in between or in the end. If after pocketing of Queen, few c/m remain on the board, he shall continue his turn till he is able to pocket the remaining c/m. On pocketing all his c/m and the Queen, he wins the board by 2 points since his opponent has already pocketed all his c/m. If he fails to pocket any of the remaining c/m, he will lose the board with the number of c/m lying on the board.
14. Reporting time shall be five minutes before the scheduled time. A player shall lose the entire match if he fails to report to the Umpire at his match Board 5 minutes before the scheduled time of the match.
15. During those five minutes, umpires would complete all the formalities as required by them and in the meantime players may have trial testing of the board for two minutes to be completed before the scheduled time of the match.
16. Matches shall start right at the scheduled time.
17. In case the score of both the players at the end of four boards is equal, the set will be decided on the basis of TIE-BREAKER. In tie-breaker both the players will be given three chances alternatively to pocket a c/m from the same side they are already sitting.
18. Tie-breaker c/m will be placed by the Umpire within the outer circle touching the line of the outer circle in straight line of the center circle on the opposite side of the player pocketing the c/m.
19. If score remains equal even after the tie-breaker, the set shall be decided by ‘sudden death’.
20. In sudden death, both the players will be given a chance each to pocket the tie-breaker c/m from the same side they are already sitting. After availing one chance by each player, if a player fails to pocket the c/m, he loses the set. The same shall continue till a decision is arrived at.
21. First stroke for both ‘tie-breaker’ and ‘sudden death’ shall be decided by a single toss. Winner can either choose the stroke or the side. In case the winner chooses the break, the loser shall have the right to choose the side or vice versa.
22. As soon as any player places the striker on the surface of the board when it is not his turn or for making an out of turn stroke, the umpire shall immediately declare the foul and the board should not be awarded against that player. Both the umpire and the opponent shall share the responsibility of being vigilant.
23. The written protest shall be submitted within 5 minutes of completion of that particular Board. The decision of the Championship/Tournament authorities should be conveyed to the parties concerned at the earliest possible.
24. Matches for cadets, sub-junior and junior players may be conducted with time limit of 20 minutes for each set and total time limit of 70 minutes for each match (including reporting/trial testing time plus two minutes time between 1st & 2nd and 2nd & 3rd sets).
25. The Chapter of Queen as given in ‘Laws of Carrom’ of ICF is changed accordingly.
26. All other rules except those mentioned above shall be applicable as provided in ‘Laws of Carrom’ of the International Carrom Federation.

My Comments and proposals

With the new Rules for Carrom Tournaments (Shorter Version Rules) the All India Carrom Federation has tried to make Carrom Tournaments easy and media and public friendly as well as to assure that the matches do not take more than necessary time.

Exactly as in recent years the changes  have been made in the pattern of the Cricket matches by introducing One Day matches and T20 matches (with 20 overs for each team) along with the traditional 5 Days Test matches in order to attract the media, public and the sponsors, it is hoped that the new rules will help in popularizing Carrom all over the world. This is a bold attempt and deserves appreciation.

– However we have to very carefully analyse these new rules and examine them to what extent they really help in making the game of Carrom simple and also attractive for the media and public and sponsors, without losing the niveau of the game.

– Moreover we should not forget that the conditions between some of the Asian countries and many other countries, particularly in Europe are different. For example no federation in the world, except in India and Sri Lanka,  is in a position to provide umpires for each board during the tournament.
The new rules, as adopted in India, depend to great extent on the role of the umpires.

– We should also differentiate between the matches for the World Championship, World Cup, ICF Cup, International Open and the National Championships as well as promotional tournaments.

– In Europe the matches are conducted on the basis of the Swiss System, which many people find quite practical in European conditions (Ofcourse it can be improved further).

– In my opinion the International Carrom Federation should give the task to the Rules Commission or to a Special Commission to examine all options in this respect and after collecting the opinions of all experts, coaches and leading players all over the world, place its proposals before the next Congress of the ICF for approval. Until then the present rules of the ICF as adopted in 1991 remain valid.

– We should also examine the possiblity of using a watch for all matches, as is practiced in Chess.

a)    For every match each player (in singles)  and partners (in doubles) should be alloted 24 Minutes for their strokes (Three minutes per board).
The time given to both sides will be 24 + 24 = 48 Minutes. Almost the same as used in Europe for a match with 8 boards in a round.

b)    A player is free to divide his time according to his convenience. He might take only few seconds for a stroke, but will be free to take more seconds for a complicated stroke. He will be automatically forced to play faster, since he has only 3 minutes on his disposal in a board.

–    Up to Semi Final all matche shall be decided on the basis of 8 boards or 23 points. A player who achieves 23 points or leads at the end of the 8th board shall win the match.

–    After 4 boards or 12 points (whichever is first) the sides should be changed.

–    The Queen can be pocketed at any time provided a c/m of his own has already been pocketed and their is no Due against him.

–    A player has the right to pocket the Queen in his last stroke after pocketing all his c/m.

–    If he pockets all his c/m but fails to pocket the Queen in the consecutive stroke, he loses the board with 2 points.

–    In case after  8 boards the points remain equal, two extra boards shall be played (after taking a toss).

–    If the Score remains still equal, the match shall be decided by « Tie-breaks » (Deciding Strokes).

–    For Tie-breaks (Deciding Strokes) the Queen shall be placed at the Centre of the Base- line of the opponent player. It can be pocketed in any pocket. The players shall execute their strokes while sitting on the their own places.

–    In Singles each player shall get alternately 5 chances to pocket the Queen. A player who leads in pocketing the Queen shall be declared winner.

–    If the score remains still equal the match shall be decided with further attempts (Final Strokes) untill a player fails to pocket the Queen. The opponent player shall place the Queen on any place on the playing surface.

–    If the score in doubles remains still equal, the Final Strokes will confirm the victory. As long as the players are able to pocket the Queen the match will continue. As soon a player fails to pocket the Queen he will lose the Board and the match with 2 points. The 2 points of the Queen will be awarded to his opponent.
–    Die word « Sudden Death » as used in the new rules is not good. It can be replaced with « Final Strokes » or some other term.

–    All other Rules as mentioned in the « Laws of Carrom » of the ICF will remain valid.

–    Particular conditions and organisational problems in diffirent regions and countries shall be taken into consideration.

There can be many other suggestions from the different Carrom federations and players, which sould be taken into consideration. 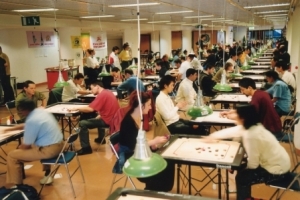 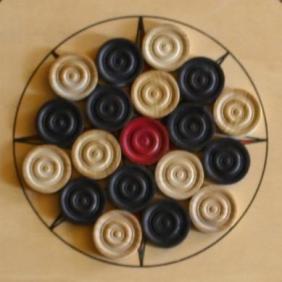